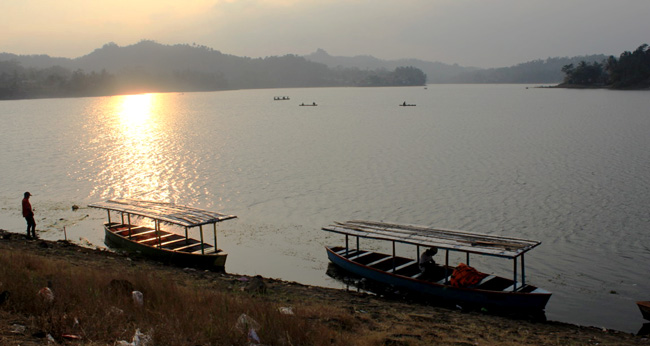 For some people, Brebes Regency is an unfamiliar vacation destination in Indonesia. However, the fact is that lots of tourists have been visiting it over time! One of the reasons is due to the presence of various tourist sites including Penjalin Reservoir. It is located in Winduaji Village and belongs to Paguyangan Sub-District, actually. The unique thing is that the reservoir is located on the border between Brebes and Banyumas Regency. It has the basic function to irrigate nearby farms and Pemali River. Still, these days, people take advantage of it as a place for relaxing and enjoying photography. Thanks to the nuance.

The Nuance
Even though Penjalin Reservoir is considered a new vacation destination, it has lure lots of visitors as the time goes by. In terms of nuance, it offers a serene atmosphere with jaw-dropping scenery. The size is approximately 1.25 km per square and it has the volume of 9.5 million per cubic! The reservoir is surrounded by several villagers including Soka, Mungguhan, Karangsempu, Kedung Agung, and many others. No wonder. Many villagers are seen on the site either to relax or take advantage of the water supply. Another recognizable feature is the presence of colorful pier having the shape of a heart!

Exploring Penjalin Reservoir
For visitors, it is recommended to get some information related to the reservoir. Have no worries. Nearby villagers may tell the information freely, especially regarding the functions. It is said the reservoir is used mainly to irrigate local farms and nearby river. Many villagers also take advantage of the site to cultivate fishes and rent out boats to tourists. No wonder, it has increased local’s economy significantly over time!

These days, Penjalin Reservoir has another function which is to accommodate tourists during weekends and holidays. People come to the location to relax, enjoy photography, and join local events actually. In some occasions, the locals conduct some contests on the site! Not to mention they hold a singing performance there! Therefore, it is better to learn the schedule first before visiting the reservoir. Tourists can get the information either from a tour guide or nearby villagers. Usually, those events are available during Eid Al-Fitr.

The next allure of Penjalin Reservoir is the nuance itself. Thanks to the pristine environment and secluded area. It is both peaceful and soothing. Plus, the wind is breezy due to the presence of big trees that surround the site. For the best experience, it is recommended to ride a boat and explore the reservoir with families. While riding the boat, tourists can even witness villagers who wash clothes by the reservoir!

How to Get There
From Semarang City, a trip to Penjalin Reservoir may take about 6 hours and 11 minutes. It is because the distance is 229 km. The first destination is Paguyangan Sub-District. Later, tourists only need to head to Winduaji Village where the reservoir resides. For a faster trip, it is recommended to take Ajibarang Secang Street.