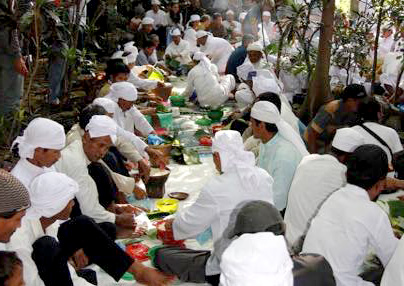 People have a distinct preference in spending their holidays. Some are into natural attractions while others want to watch unique traditions of a specific region. For those who belong to the second option, they have Ngasa Ceremony in Brebes Regency. Another name is “Sedekah Gunung”. What is it? In a nutshell, it is an Indonesia local tradition done annually every Tuesday (especially during Kliwon date). During the ceremony, the locals carry foods and other offerings and visit nearby sacred places for praying. The purpose is to show gratitude due to the blessing that was given by the god for the current year.

The Nuance
It is true only local people conduct Ngasa Ceremony. However, that doesn’t mean outsiders or tourists are not allowed to watch and join the event. As long as they don’t disturb the procession, they are good to go. What about the nuance? Villagers may wear clean white attires and carry some foods. It involves any ages including adults and kids, in fact. One thing that tourists should know is that these people would walk to the destination instead of using vehicles! This is how they show their sincerity and gratitude, after all.

More about Ngasa Ceremony
Before joining Ngasa Ceremony at Jalaswatu Village, tourists should talk to their tour guide first regarding the schedule. As an alternative, they can talk to villagers and ask the information right away. Still, hiring a tour guide is the best option as he is able to tell the thorough history and information related to the event itself. It is said the first Ngasa Ceremony was done during the reign of Raden Arya Candra (the 9th regent of Brebes).

As for tourists who want to join the ceremony, they must watch how villagers prepare everything beforehand. Local women may prepare and carry foods in both arms and head to Kumbang Mountain by foot. They belong to Jalaswatu Village, actually. Despite the fact, many participants also come from other nearby villages. This explains why outsiders and tourists are allowed to join the ceremony. It is true these women prepare everything, but their husband also helps them both during the preparation and the trip.

After passing through Zubaedah Bridge, the next destination is Gedong Cemetery. At the site, the elders lead the ceremony and cast some prayers together with all participants. At the moment, no one should ruin the sacredness though. That means tourists should postpone their intention if they want to take pictures or talk to others. Also, they must wear proper attire and get the concern from the villagers first before joining the event!

How to Get There
The best place to watch Ngasa Ceremony is Jalaswatu Village at Ketanggungan Sub-District. From Semarang City, it may take around 5 hours to get to Brebes before heading to the village. It is because the distance is 210 km. Have no worries. The trip becomes faster if tourists take Raya Pantura Street.