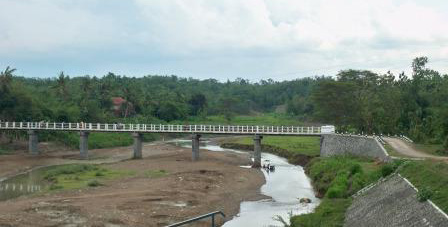 For some people, visiting a dam becomes a good idea to spend a holiday. The most important aspect is only the destination. In Brebes Regency, for example, there is Cisadap Buara Dam! As the name suggests, it is located in Buara Village and belongs to Ketanggungan Sub-District. In terms of function, it is similar to other dams. However, this one has become an alternative to spend a relaxing time either alone or with families. Most tourists come to the location to enjoy relaxation, photography, and exploration actually.

The Nuance
In terms of nuance, Cisadap Buara Dam is considered peaceful. The reason is that the dam is located in a secluded village. It resides at the height of 50 meters above the sea level and the site has a high rainfall. Not to mention the location features hilly areas, which make it soothing and comfortable. What about the size? The dam has a moderate size and sturdy construction. The flow of the river is not quite strong either. The thing is tourists should be careful in exploring the site during a rainy season. Not only the site becomes slippery, but it also comes with a stronger current of the river.

Exploring Cisadap Buara Dam
It has become a common trend in Indonesia. Many dams have turned into a new vacation destination, including the one called Cisadap Buara in Brebes Regency. Still, tourists have a distinct reason for spending the time at the dam. The first common reason is to enjoy sightseeing. That means they may climb the dam and watch beautiful scenery of nature from the location. Even the river looks majestic from up there! The only consideration is the weather. Tourists should never come during rain!

The next reason why Cisadap Buara Dam becomes a nice vacation destination is the nuance. People come to the site in order to enjoy relaxation and to feel the breezy wind of the site. Not only the dam offers an amazing panorama and comfortable atmosphere, but it also comes with the soothing sound of gurgling water. Somehow, the sound helps visitors to relax and enjoy the atmosphere in a more comfy manner. It even feels better if they enjoy the nuance either with friends or families.

Another reason to visit Cisadap Buara Dam is to learn the thorough function of it. It is said people who live in Buara Village depends on rain to irrigate and supply water. Knowing such issue, the local government decided to build the dam to accommodate the necessity. No one expects that the dam also becomes a new vacation destination in Brebes!

How to Get There
From Semarang City, a trip to Cisadap Baura Dam may take around 4 hours and 56 minutes as the distance is 214 km. It can be done faster if they take Raya Pantura Street, though. The first destination is Ketanggungan Sub-District. Later, tourists only need to get to Buara Village where the dam resides.