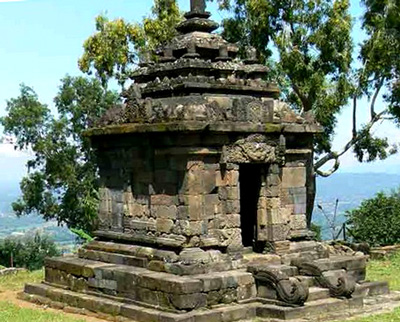 It is not surprising that Brebes Regency has a nice temple called Pangkuan. In fact, it has become one of the best places to visit during holidays in Indonesia. The location of this historical temple is in Cilibur Village and it belongs to Paguyangan Sub-District. In the past, people call it Alas Tua or the old forest. The reason is clear. It is because the site was surrounded by big and dense trees back then. These days, tourists take advantage of the site to enjoy photography and relaxation. Some visitors also want to learn the history of the temple during the visit, though.

The Nuance
Pangkuan Temple is located at the height of 700 meters above the sea level. This explains why the nuance is peaceful and refreshing. Tourists can even see a nearby mountain and hills clearly from the site. The temple consists of both indoor and outdoor parts, serving a different function. In terms of size, it has the total area of 4 hectares! One of the best features is called Batu Lonjong, which was used to conduct hermitage and perform worship. Plus, several old tombs reside in that area which belongs to Nyi Rantans Sari, Kencana Wungu, Kyai Wisnu, and much more.

Exploring Pangkuan Temple
The first thing to do once arriving at Pangkuan Temple is to learn the history. This explains why tourists should come with a tour guide who can tell thorough information about it. After hearing the story, tourists can start exploring the temple. As mentioned before, many big trees grow on the site (having the age of hundreds of years). Somehow, the nuance feels like a tropical forest. No wonder, visitors may meet several exotic animals including butterflies, bats, monkeys, and many more.

During the exploration, tourists may find several ancient tombs as well. It is said these objects belong to the megalithic era! In fact, according to the tour guide, people often come to the site to conduct a ritual in the past. The purpose was to strengthen their magic power and look for the blessing from the god. Well, it is true visitors are allowed to take pictures either inside or outside the temple. However, they should not litter or spoil the environment during the activity.

Another allure in Pangkuan Temple is the presence of tens of monkeys who live in that area. Have no worries. Despite the wild behavior, these animals are quite approachable. Tourists can even feed them with peanuts or other snacks. Some of the monkeys are too shy to approach people, though. What a cute animal!

How to Get There
For those coming from Semarang City, they need to undergo a long trip in order to get to Pangkuan Temple. It is because the distance is 235 km, so the trip takes approximately 6 hours and 4 minutes. As for the fastest route, it is Raya Pantura Street. Once arriving at Paguyangan Sub-District, tourists only need to get to Cilibur Village where the temple is located. That’s all.